Signs of the Times

I did watch parts of the lunar eclipse last night.  The viewing conditions were excellent, and it was impressive.  But this isn't about "Blood Moons".

I bought another motorcycle to keep my FJ-09 company in the garage.  This one is a 2013 V-Star 1300 that had been sitting in the warehouse.  It's a cruiser, a little more laid-back than the FJ, but this isn't about the bike, either -- though it is related. 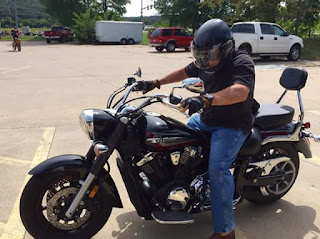 Vox Day posted about unrest in Europe.  The majority of Europeans consistently vote for more socialism, more globalism, more statism and more socially liberal policies.  It is not the majority throwing a fit right now.  It is the underclass that, perhaps, fears being displaced by the wave of third-world immigrants, that doesn't like Islam and Sharia, that isn't tolerant.  The European equivalent of redneck trailer trash is fed up and ready to protest.  Soccer hooligans will riot over a game that ends 1-0.  The state is powerful and better armed, possibly than the protesters.  We may get a chance to see modern riot control techniques in action.  The state, meanwhile, will mollycoddle the invaders.  I wonder how that will sit with the natives?

Oh, yeah, bike-related.  I bought the V-Star from a dealer in Fayetteville, Arkansas.  Fayetteville hosts the 4th largest bike rally in the country the last weekend of September.  It's called "Bikes, Blues, and BBQ".  There is lots of live music, thousands of bikers, and lots of vendors down on Dickson Street pedaling their wares from tents to the biker community.  It's pretty cool.  I had never been before, but since I had the cruiser, I took it down there.

I was with a friend checking out the various things for sale, and I ran across a mechanics shirt printed with the Rebel flag.  I bought it, put it on, and walked around the rest of the day with strangers stopping me and telling me how much they liked my shirt.  The battle flag is extremely popular.