No, I don't work for CRKT, and I certainly don't get their knives free.  Although if any CRKT personnel happen by, I would certainly be willing to volunteer to run tests and post reviews for them.  For now, I just have a weakness for some of their designs, and I have found them to be good carry tools.

When they say "Minimalist" they are not kidding. 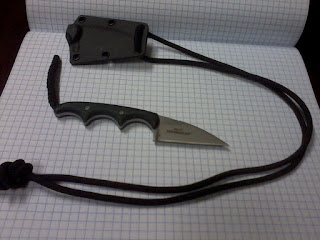 The blade comes in multiple configurations, including a clip-point called a "Bowie" which is really stretching the term.  I chose this one because I was looking for a utility knife rather than a defensive blade.  In a desperate situation it would function as a slashing edge. 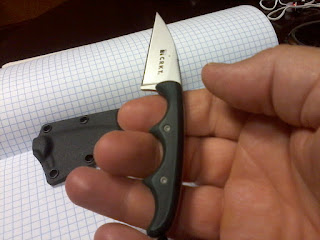 Despite its miniscule dimensions, the knife is quite comfortable to use in food cleaning and preparation.  I have used it to clean and cut up radishes, onions, and strawberries from our garden.  It would certainly skin a squirrel and dress quail, doves, or panfish, though filets are obviously beyond it  Mostly, though, it is a good backup that can be conveniently kept on one's person at all times.

There are three ways that I carry the Minimalist.  First, of course, is with the cord looped over my head.  This is a nice, handy carry when cleaning vegetables, cutting string to tie up tomatoes and similar applications.  I'll be staying in a hotel for a few days in the near future, and the Folts will be worn as a neck knife most of the time, including in bed.  I will be careful not to annoy my wife in certain situations.

The knife also comes with a belt clip that can be attached to the sheath with a couple of Allen screws.  The arrangement can be varied depending on the user's handedness and gear setup.  So you could hang it upside down off a Molle strap or whatever.  On a belt out in the field, the Minimalist just disappears.  It is a good choice for reducing weight and bulk when backpacking, hiking, hunting or working outside.

The third options is to simply drop the sheathed Minimalist into a front pants pocket or a pocket on cargo pants.  Even in dress pants, especially without the neck cord, the Folts carries discreetly.

I have no complaints about the blade steel, and I really like the flat grind.  The Micarta grip is attractive and well-designed.  I am surprised at how much pressure I can get on the blade which has a relative thick and heavily grooved spine. By the way, the little lanyard is good for more than decoration or pulling the knife out of your pocket.  I drop it between my pinkie and ring finger to make my grip on the knife more secure.

I have had the Minimalist for a while now.  It is relatively easy to sharpen, maintains the edge well, and functions as designed.  I think I paid around $20 for it, and I would say that it was a worthy investment.
Posted by mushroom at 2:57 PM


When law and morality are in contradiction, the citizen finds himself in the cruel dilemma of either losing his moral sense or of losing respect for the law -- Bastiat