I picked this knife up last fall at the Smoky Mountain Knife Works store in Sevierville, TN (childhood home of Dolly Parton) when we drove around through some of the Southeastern United States.  This was about the time they were having some of the big fires around there.  If you are ever in that part of Tennessee, it is worth stopping in Sevierville (which is apparently pronounced "severe-ville", instead of sev-e-Ya), and the SMKW store is like the Bass Pro in Springfield, MO.  It's cool. 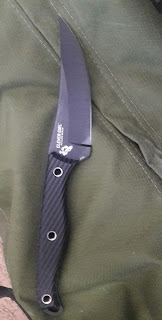 I was interested in this knife for a couple of reasons, not the least of which is the story behind it and the designer, Army veteran Austin McGlaun.  CRKT has a series of these Forged by War knives where some of the profits go the charity of the maker's choice. 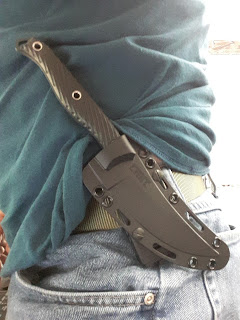 Another reason I decided to pick up this knife was the sheath.  It locks in solidly and can be attached to belt or pack in a number of configurations.  This high, haft-forward crossdraw works well for me.  If I wanted to conceal it -- not that I normally would, a loose-fitting, untucked t-shirt hides it adequately as long as I am standing.  I have to push it back on my ribs a little more when I sit down.

A third reason I decided on this particular blade is the size and construction.  A four and half to five inch blade on a belt knife is a good size for almost any task, neither too big nor too small.  Blade length on the Clever Girl is 4.6" and 10.125" overall.  The blade material of the factory knife is high carbon SK5.  It is hard and holds an edge well.  I worry just a little about brittleness, but I've had no reason to worry so far.

The spine of the blade is about 3/16" (4mm) through the haft and at the base of the blade, tapering to needle point on the upswept end.  Again, an alarm bell sounds with regard to snapping off the tip, but I'm not going to be throwing it.

The blade shape lends itself to slashing, if I were going to use it defensively.  Upward thrusts in a hammer grip also seem a natural movement.  It looks deadly in an ice-pick grip as well.  From a more utilitarian, less deadly view, it would also make a nice skinner with that upswept tip, reminiscient of a classic Persian sword.  I'm sure it will peel potatoes and slice and dice all your camp and trail comestibles.

What it is NOT is a chopper.  The knife is handle heavy, with the balance point being a good inch behind the blade.  It will be a quick blade.  The pommel, meanwhile, has a "glass breaker" and is solid.  Carry something else to chop your camp wood.  Except in an emergency, I probably would be afraid to baton the knife, and even then I would be reluctant.  There just isn't enough blade out on the sharp end.

If you are looking for an all-around, do-everything camp/bushcraft knife, this is not, repeat, not it.  Again will work great for skinning and cutting up meat -- whether the object in question is alive or not.  Self-defense in extreme circumstances, such as occur in war zones abroad or at home, is clearly the intended purpose, and no one needs to apologize for that, any more than they need to apologize for making a Glock 19 or Smith & Wesson snubnose.

I called it a "biker knife", not, though, because I think Sons of Anarchy is representative of motorcycle riders or bike culture, but because, as bikers, we sometimes find ourselves in situations where a belt knife is handy.  Even a one-hand opening lockback can be a challenge to handle while wearing winter gloves.  If you need one in a hurry to cut something free from a belt or chain, for example, pulling a good cutting blade out of a tight-fitting Kydex sheath is faster than fumbling with a thumb stub or a retaining strap.    And, as bikers, we tend to be supportive of veterans.  This is an opportunity to show that support by paying a little extra for a quality product that helps out those who have earned our respect and gratitude.
Posted by mushroom at 11:55 AM No comments: