I didn't intend to post anything, but the weather has been too cold for riding, and I am kind of keeping an eye on a project that is wrapping up.  My part should be done.  I'm just trying to make sure that nothing on my side holds up the rest of the team.

While I'm waiting to get out on the bike, I loaded up some ammunition.  A while back I mentioned the versatility of the .44 Remington Magnum.  One of the loads to which I referred was using Hodgdon H110 and 180-grain hollow points, like the Sierras pictured below. 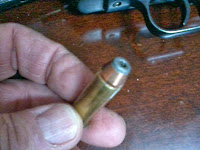 The load data from Hodgdon lists a 29.0 grain load of H110 under a Hornady XTP 180-grain bullet at a little over 1700 feet per second.  It's fairly low pressure and gives the skittish loader such as myself a little breathing room.  It's a pretty full case which often suggests consistency and thus accuracy.

So far, that seems to be working out.  H110 is not a terribly fast powder.  It lies closer to the median than the top in terms of relative burn rate, and Hodgdon classes it as a medium duty/magnum powder.

REMEMBER:  Never trust anybody's load data, especially what you see on the internet.  This works fine in my revolver, but if you blow yourself or your weapon up, don't blame me.

Anyway, I loaded up some of those Sierra HPs and tried them out.  I have never used anything except 240-grain bullets in my Super Blackhawk because it has always shot them to point of aim, and, if something works amazingly well, I'm reluctant to change.  Obviously, adding 400 or so fps with a lighter bullet means flatter shooting.

I have been loading Blue Dot and 2400 under my 240-grains.  The recoil is "sharper", I think, with the heavier charge.  I feel like I'm getting more muzzle lift, but, if that's the case, it comes later since the SBH is throwing the 180-grains low.  That's not unusual for handguns.  It gave an excellent 25-yard group.  I haven't had a chance to try longer ranges and side-by-side comparisons with my 240-grain loads, but it does look like I have a new varmint gun. 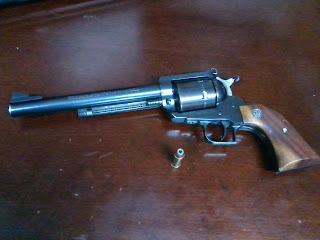 I hope everybody has a Merry Christmas.